Although my last visit in Tel Aviv was in February and my next one is just around the corner, I have decided to write a bit about the local vegan scene that is blowing my mind in every visit.

A vegan trend is taking over Israel in the past couple of years, and if my Facebook is an indication it is because of an American dude in sandals, Gary Yourofsky his name.  Of course that there were vegans in Israel before Yourofsky gave his world famous lecture at Georgia Tech in July 2010, but there is no doubt that their number increased following the lecture.

If you haven’t seen the lecture yet, this is the time (with more than 30 subtitles):

An interesting theory that I have heard a few times from different people claims that what Israel is experiencing is a “veganwash”, that is, people who subconsciously have the need to balance the virulent feeling of the Israeli occupation channel their compassion to animals, hence clearing their consciences. As wild as it sounds, once this idea sets in, it kind of make lot of sense.  I am not saying this concept is true, I am not saying all vegan are like that, I am not saying people are vegan because of the occupation, I do however, say, that there might be a connection. Might. And until proven wrong, why not?

The new Israeli vegans, sometimes referred to as “Yourofsky’s Vegans”, became vegans overnight. They went from carnivores to herbivores in no time, skipping the vegetarian stage which is part of many vegans’ lives. Some of them turned to militant veganism, and active animals’ liberation, some of them contribute a great deal to the flourishing vegan scene, from blogs to homemade catering, developing the vegan industry and promoting the idea. Hopefully they are here to stay!

One of the side effects of this vegan wave that has washed the shores of Israel is the unbelievable amount of new vegan restaurants and cafes and of vegan friendly places – the abundance is wonderful! Tel Aviv for example, has more vegan options than Hamburg, and mind you, Tel Aviv has less than 500,000 inhabitants and Hamburg almost 2 million.

For time being I was checking vegan places mainly in the Tel Aviv area, but rest assure that there are other places outside Tel Aviv as well which I am hoping to be able and visit in the future.

So here we go, some reviews from my last visit! 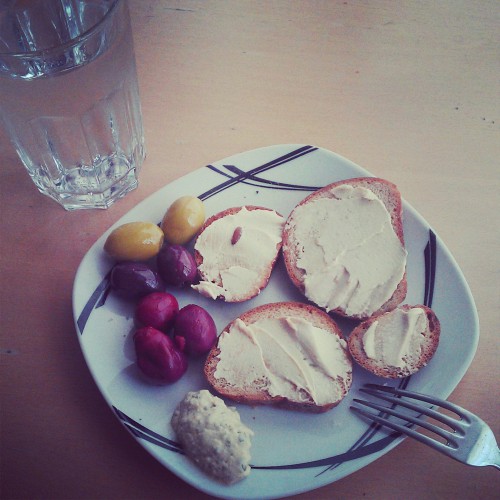 One of my favorite spots in Tel Aviv is The Streets. There are 3 locations and this time I enjoyed the new one on Ibn Gabirol Street. The place is not vegan but vegan friendly and offers wonderful simple vegan dishes: 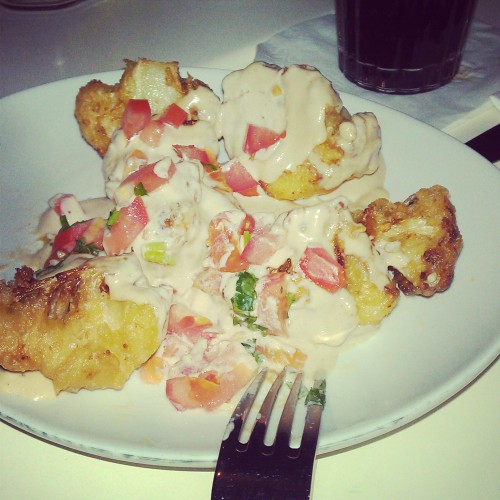 I LOVED the cauliflower in tempura with tahini and tomatoes (winning combination, no doubt!). I also had the Tofu salad with lots of veggies (avocado!), tofu cubes and sweet potatoes in chili-tahini dressing. In another visit I have tired the mini vegan burgers with purple onions and fries – delicious! 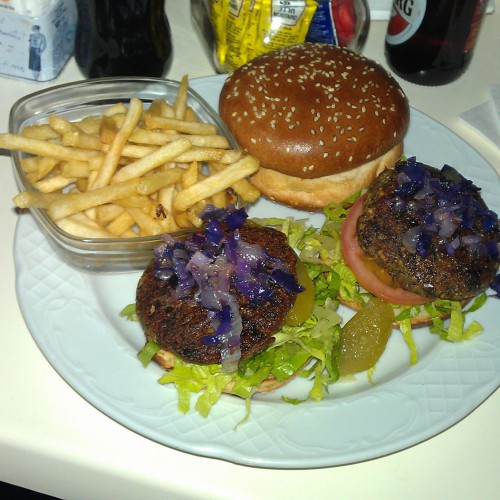 We had a wonderful Saturday lunch at a small place in south Tel Aviv/almost Yaffo. The place, Yahaloma, is run by, surprise surprise, a wonderful woman named Yahaloma (diamond in Hebrew).  This lunch was epic! I dragged my husband and my sister and her friend to have lunch with an Instagram friend I have never met 🙂 , the friend brought two of his vegan friends and we ended up eating in the middle of the street at a big table that Yahaloma set. The place is not vegan but is super vegan friendly and the dishes are special, fresh and made with tons of love by Yahaloma. 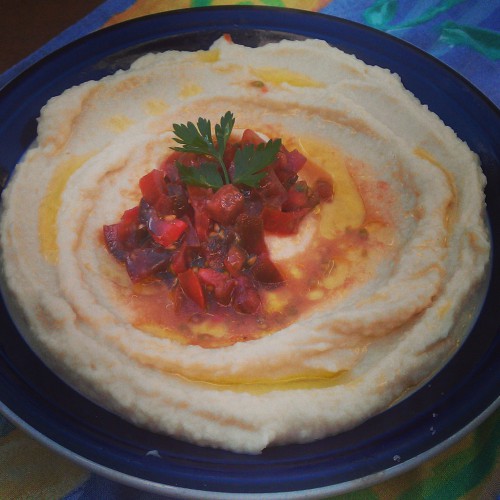 We had: hummus from fava beans, out of this world falafel (and believe me, I am Israeli, I know good Falafel), comfort couscous, fusion samosas (were so good we ordered them twice!) and mangold leaves filled with bulgar and pine nuts. For dessert Yahaloma apologized, saying not much was left from her vegan desserts, she brought us a plate with some vegan samples and we ate them so fast I do not even remember what was there and of course that no photos were taken!  But I do remember they were REALLY good. I cannot wait to go back there! 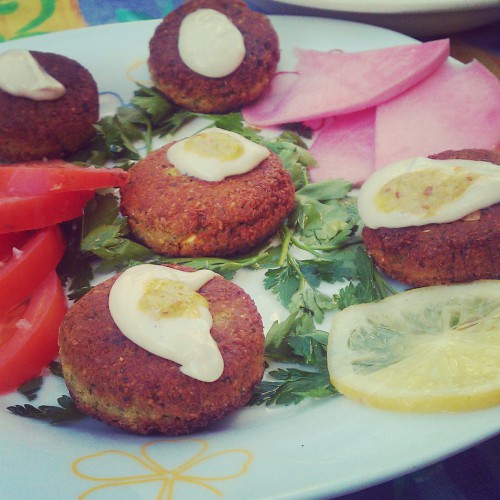 Orna & Ella is a famous old (since 1992!) restaurant in Shenkin, Tel Aviv’s hip street; a tiny street with some shoe stores, cafes and yes, Orna & Ella. I have heard many good things about their vegan options and was happy to finally pay a visit. We received a table in the inner patio, with big fans cooling the warm February (!) breeze. As a starter, I had the salty sticks with macadamia cream. For the main course I had the Cauliflower Sinaya. A wonderful dish of baked tomatoes and cauliflower in tahini (FTW!!!) served with lentils and rice (mejadra). I liked it so much and actually made it a few times at home since coming back (yes yes, recipe, soon!). For dessert we tried the homemade Bounty – the reason I actually went to Orna & Ella and yes, it was worth it! 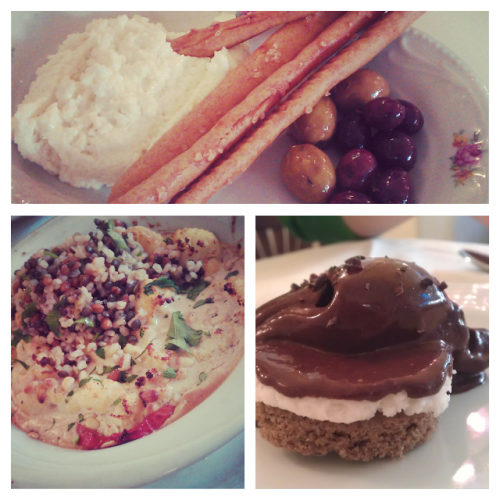 A wonderful fast food expierence was at The Vegeterian Shawarma. They should call is the Vegan Shawarma! It is 90% vegan and offers every fast food vegans can dream of. I took the Shawarma with fries and onion rings and vegan mayo. Was so tasty we actually had a takeout from them on our last day in Tel Aviv (they deliver!)

The menu offers, besides shawarma, burgers, schnitzels, kebabs, all served in a pita, baguette or a laffa (big big pita!). There are also pizzas and salads. 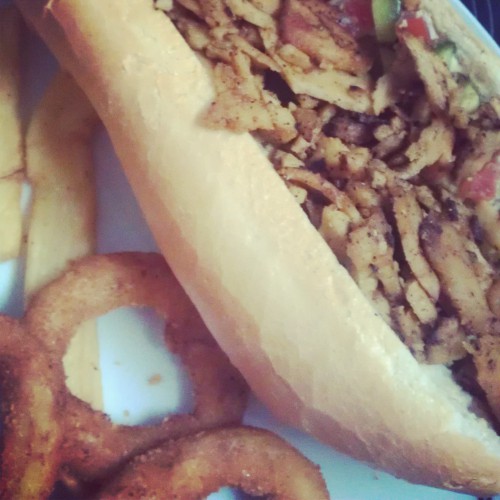 A one day trip to Jerusalem brought with him a visit to Hummus Lina in the Old City / Shchunat Hanotzrim St. / Jerusalem / one of the best hummus, ever! With Ful (fava beans). 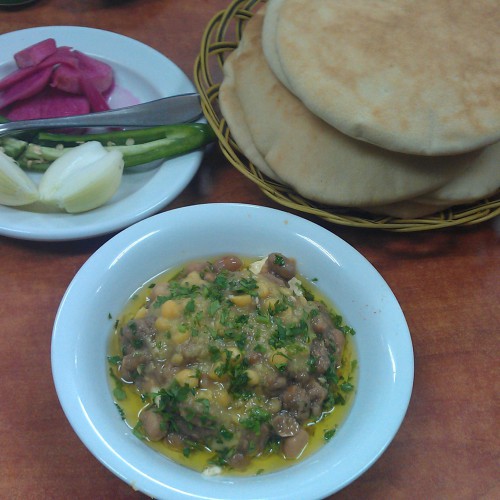 And to the best sweets place in the Muslim quarter, no, I do not know the name but it is right in front of the Austrian Hospice / Via Dolorosa 37, Jerusalem 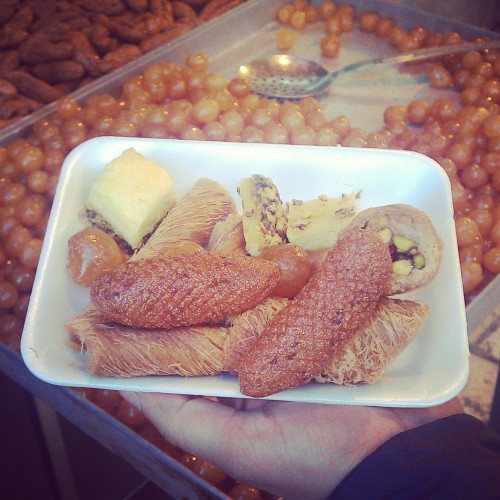 And the reason we went to Jerusalem: 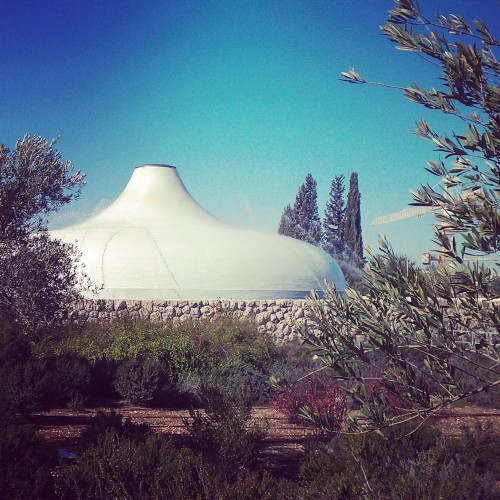 The Shrine of The Book / Israel Museum