Exactly a year ago this blog came to the virtual world.

Yes, I have been cooking and writing and taking tons of photos for years but only a year ago I have decided to try to do something more serious with it. I wanted something fun, colorful, delicious, with lots of photos! So far so good!

I would like to take this opportunity and thank you all dear readers, for stopping by, registering for updates,  leaving comments and basically making every minute I work on this blog worth it! THANK YOU!

If you read my previous posts Vegan Tel Aviv #1 and Vegan Tel Aviv #2 you probably know by now that Tel Aviv became a leading vegan heaven in the past few years. The variety of reasons can be a topic for someone’s dissertation: from the fact that Mediterranean and Middle Eastern cuisines tend to be vegan friendly and are easy to veganize, to the effect of Gary Yourofsky’s lecture on the Israeli audience, and, as I heard more than a few times, some kind of a Vegan Washing that has a connection to the violation of Palestinians human rights. Whatever the reasons are (see the end of this post for some articles on the subject) it cannot be denied that Israel has a strong vegan tendency and a growing animal rights movement that created a brand new world of unique – authentic and fusion – vegan cafes and restaurants and of vegan menus in many other non-vegan places. 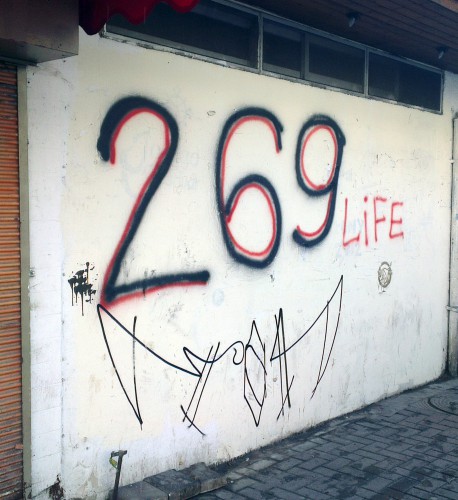 A view on Tel Aviv from Jaffa

In my last visit I spent a week and a half in Tel Aviv and more than two weeks in my hometown of Eilat. I tried a few new places and went back to some that I liked in the past. It is important for me to clarify that I am not trying to create a restaurants review post here but rather tell you simply where I ate and what I liked, and if it was good in my opinion (and show you some photos!).

So, here it is dear readers, my third account of Vegan Tel Aviv, March 2014 – me, my amazing sister, some good friends (mostly non-vegan!), crazy weather, and a 23 weeks baby bump!

Tenat  – The first place I have tried with my foodie non vegan friend, “The Other” Gil from the food blog “Mevashel Veochel” was an Ethiopian vegan restaurant in south Tel Aviv, an area that witnessed a migration of a large community of foreign workers and refugees. Tenat is a small restaurant with a few dishes only. We had the Injera dish –  a special Ethiopian sourdough flat bread, made out of Teff flour, on the bread, a few stews (lentils, potatoes, chard), a fresh salad, spicy paste, and some raw tahini with lemon. Gentle flavors and a delicate mixture of stews! I enjoyed it so much and actually went back with my sister for some take out a few days later. 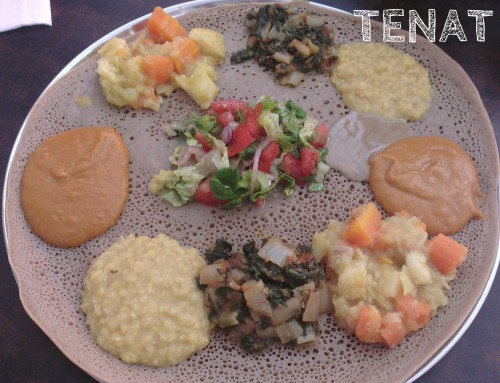 Anita – After walking in south Tel Aviv for a few hours, Gil took me to Anita, a famous ice cream place in Florentine, one of Tel Aviv’s popular neighborhoods. Imagine the smile on my face when I was told that they have a whole section of sorbets, made out of fresh fruits, water and with 0% fat. I took mango, coconut, and passion fruit and smiled for a very long time. Was super delicious! On a second visit I took only the mango & coconut and on the third I added the banana date sorbet. Yes. There were 3 more visits… 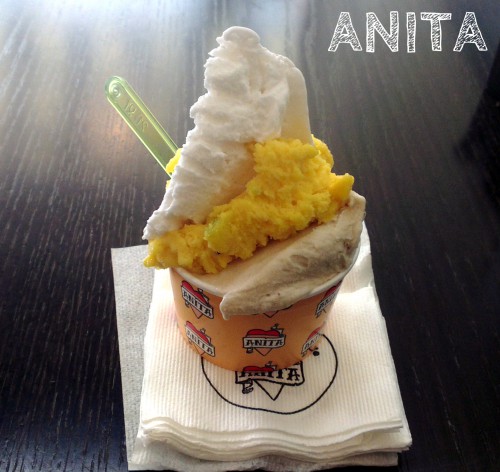 My Anita photo was featured on a lovely blog about ice cream from all over the world! The blog, Berlin Ißt Eis,  is run by my IG friend from Berlin – Saphena78.

Furama – a big fan of Asian food and especially of dumplings, Dim Sum, Gyoza, and Bao – I paid a visit to Furama, a Dim Sum restaurant with a vegan menu. I had the fried vegetables Won Ton, the Bao (yeast dough steamed buns) and the Tsang Fen (rice paper dumplings). We also had the carrots and radishes salad which was a perfect match to the dumplings. After a lovely conversation with the owner (a Chinese Israeli guy) he let us try a sticky rice water chestnuts dessert that we didn’t like at all – but aside from that we enjoyed our food a lot! 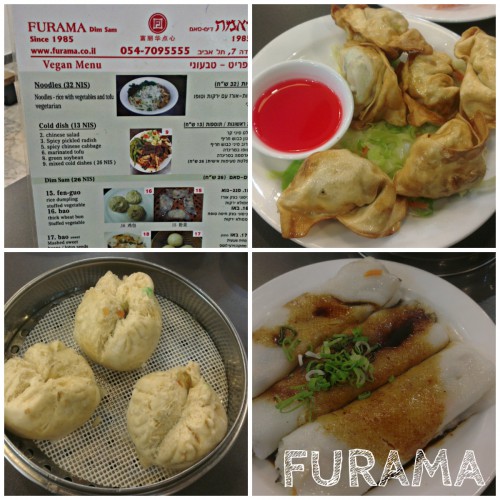 Abu Hassan – funny little place my land. We claim that hummus is “ours”, part of our national food, and yet the best hummus of Israel can be found at our Arab neighbors, which means a lot about the connection between “us” and “them” – we are all hummus lovers at the end! I heard A LOT about Abu Hassan (the nickname of Ali Karavan, which founded Abu Hassan in 1959, rumors saying that his wife, Um Hassan was behind the hummus), a hummus empire in Jaffa, once an (independent) Arab port city and nowadays a part of Tel Aviv. Actually, Tel Aviv is Tel Aviv-Jaffa for some years, but no one uses it. Anyway, rules of Abu Hassan are: arrive early (once the daily amount is gone the place closes down!), eat fast (there’s a line!!!), and be happy (smile and start planning your next visit).

And that’s what we did. The place (there are actually 2 places, one in front of the other!) was packed but we had luck and got a table pretty fast. We ordered the triple dish: hummus, ful (fava beans), and masabacha – with fresh pitas and a spicy lemon olive oil dip. I am not claiming that I am a hummus expert but Abu Hassan was without any doubt the best hummus I have ever eaten and I did eat more than a few. I don’t think there are enough adjectives to describe the lightness of the dish (which can be heavy), the freshness, the delicious mixture of flavors and the amount of mmmmmmmmmm… we produced. Abu Hassan hunted me for days after the visit and once my husband arrived I had to take him there. Sad thing was that although my husband loved the dish, he was bothered by the noise and chaos and mess and the shouting over the heads (it’s how the place operates). So, maybe it is not for everyone… 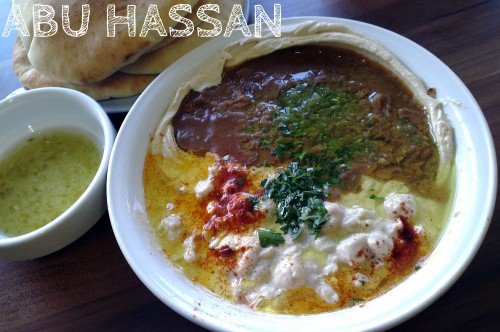 Meshek Barzilay – the title says “an organic kitchen from the village” – this place used to be in a farm outside of Tel Aviv until last year. A very nice atmosphere (in one of Tel Aviv’s hype areas – Neve Tzedek) with a professional service with a smile combined with special vegan dishes, the visit to Meshek Barzilay was a success. We had hummus (damn!), hearty farm bread and tahini, and a salad for starters. My sister took the Indian tally dish and I took the seitan, mushrooms and nuts burger with sweet potato mash with coconut and shallots. All was wonderful! And, at the end, our lovely waitress brought us a dessert “on the house”: “The Holy Trinity”- we read the description, something with Halva that we both dislike, but decided to try it anyway. Pfffffffff. Was unbelievably good! Cashew cream, bananas and chocolate mousse (and lucky us no strong presence of Halva). I thought it was one of the best desserts ever, my sister added “one of the best VEGAN desserts ever”. 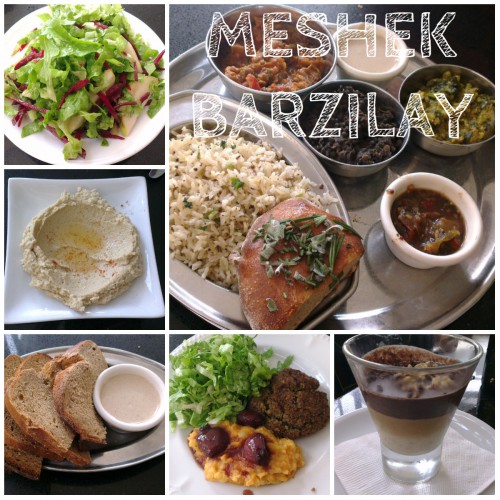 Café Louise – On Vegan Tel Aviv #2 I wrote about the vegan breakfast I had at Café Louise. I went there again and shared the “Couple’s vegan breakfast” with my friend. I was happy to discover that just like last time the breakfast was hearty, rich and delicious. Several dips (Tapenade, dry tomatoes, tahini with silan and seaweed, hummus, peas, garlic, beets and nuts, homemade jam), Quinoa and nuts fritter and a rainbow salad, plus fresh OJ – a lovely start for the day! 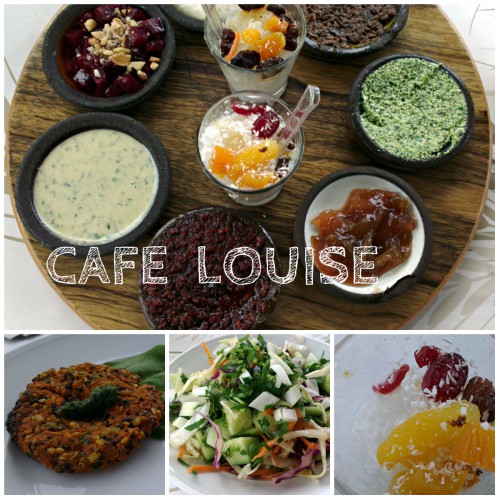 The Streets  – One of my favorite spots in Tel Aviv, this time I tried their vegan breakfast. There was a chickpeas omelet (I am not such a big fan of fake eggs stuff but it was good) with several dips, fresh bread, a salad and a soy cappuccino. Definitely a refreshing breakfast for someone who cannot get any vegan breakfasts! 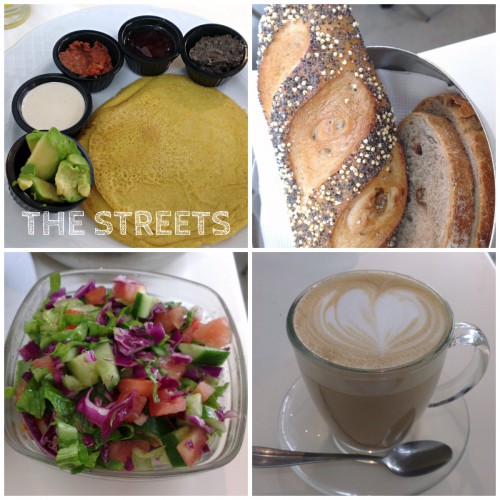 A few more places that were visited:

Again, a reunion with two people who I love in a typical meat place outside of Tel Aviv. The endless amount of fresh mezze salads was more than enough for me: 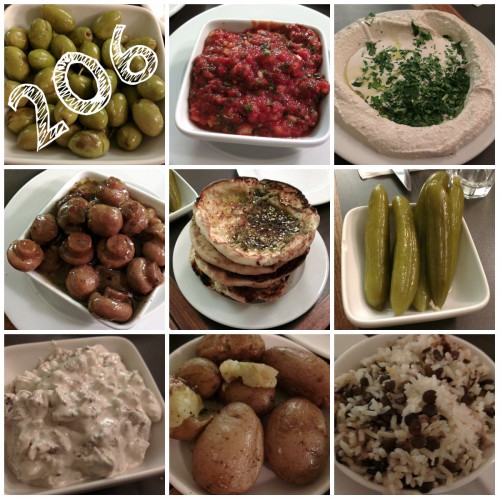 Again, paid a visit to the most famous Sabich place in Israel – Oved in Givataim – fried eggplants, tahini, parsley, onions, pickles, salad all wrapped in a fresh pita. Yum. I love Sabich: 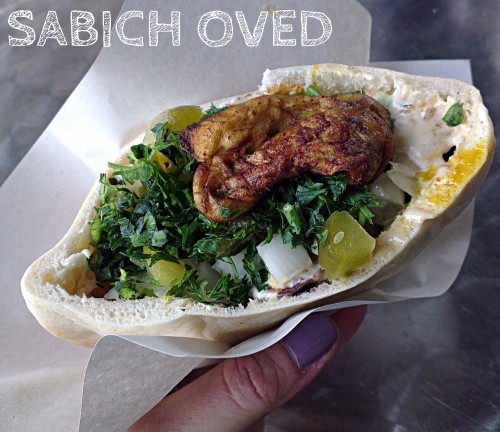 The award of the most surprising vegan meal goes to my aunt, Nina. A huge family gathering that started with my cousin’s wife telling me “it is so hard and boring to be vegan” and ended up with an amazing amount of vegan dishes, created by my aunt and uncle. Was absolutely delicious and I was moved by the fact they went into all this trouble, making sure I will not be hungry. 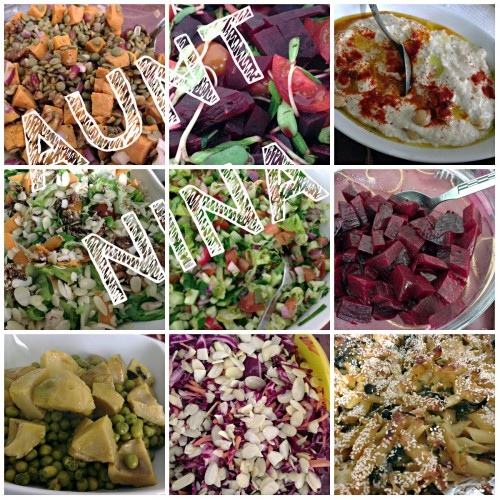 So yes, “very hard and boring”:

The best homemade dessert was made by a friend of my sister, this biscuits and non-dairy cream cake is like ice cream cake and I was more than happy to take the leftovers with me and enjoy it a few more days – WHAT A CAKE – thanks Yuval!!! 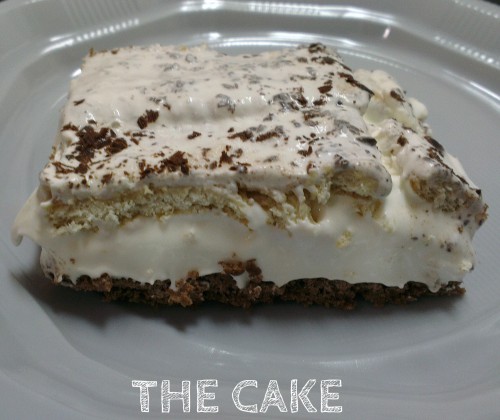 Another place that I enjoyed was Eden Teva Market, a supermarket (let’s say it is kind of the Whole Foods of Israel) with a large vegan offers – here is the Tahini section at the market: 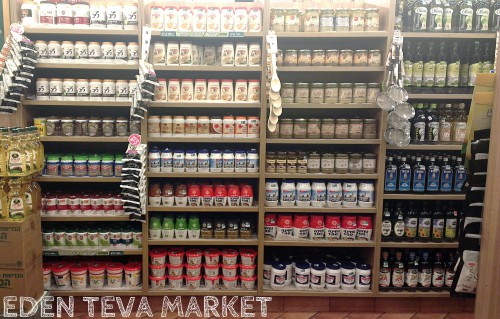 And, last word on Tel Aviv, a big NO goes to the vegan Pizza of “Pizza Mama Italia”. I heard good things about the place. We ordered 4 trays (1 vegan, 3 not) and ALL were simply bad. It is hard to ruin a pizza, but somehow they managed. My vegan pizza sucked; the vegan cheese was horrible. 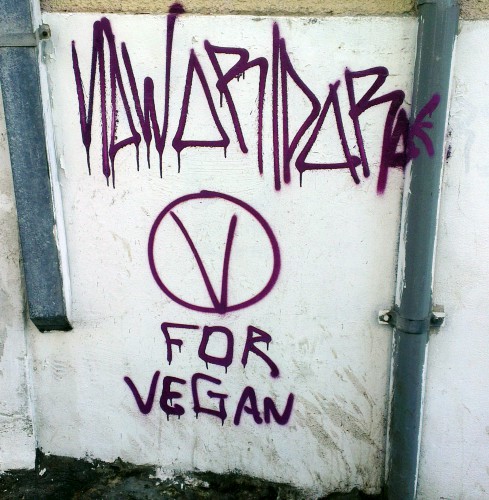 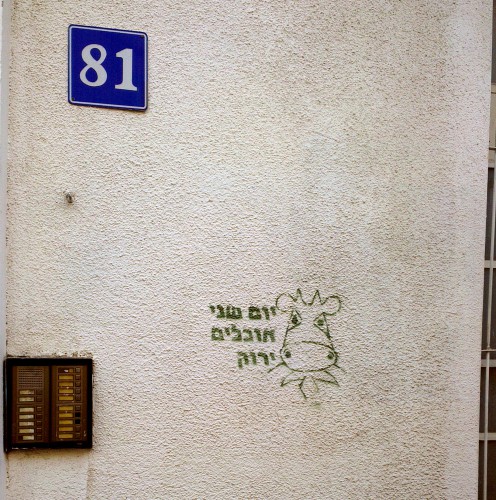 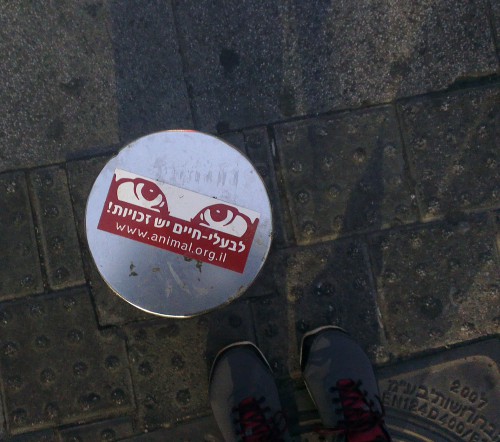 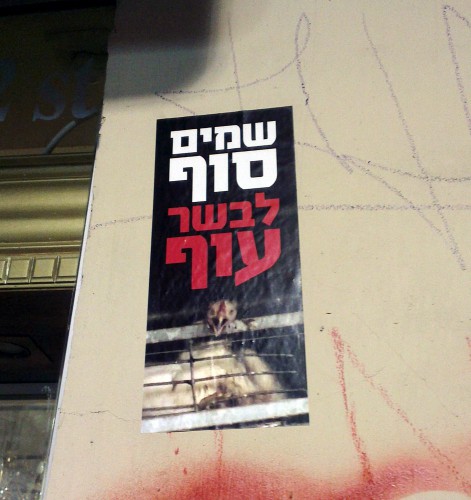 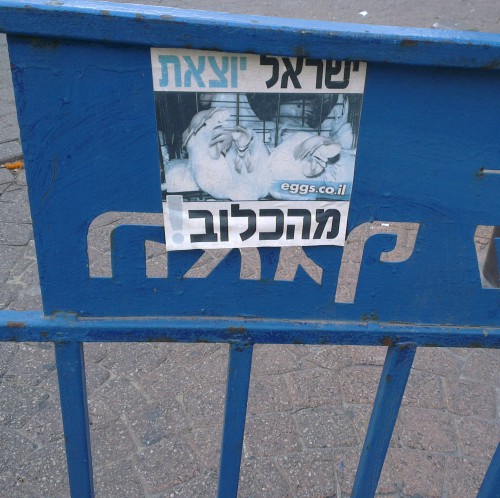 Israel is exiting the cage

After a week and a half in TLV I flew home, to Eilat, my sleepy desert city, right on the Red Sea, between Jordan and Egypt: 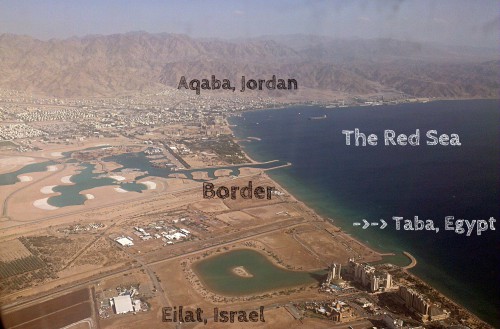 I spent most of my days on the beach: swimming, snorkeling, reading, eating… 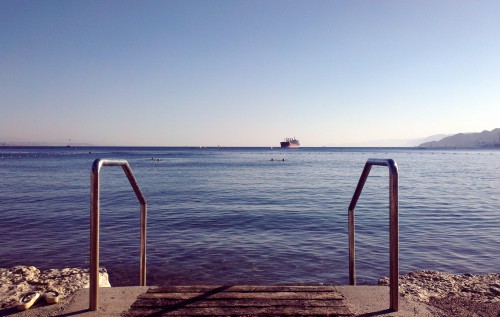 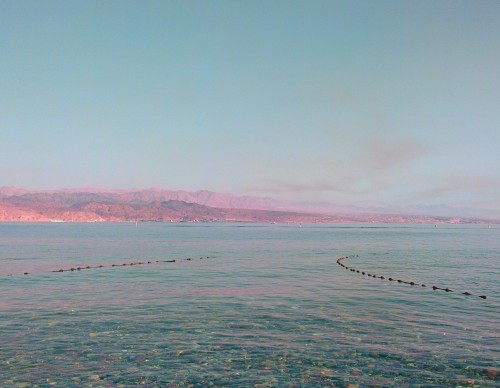 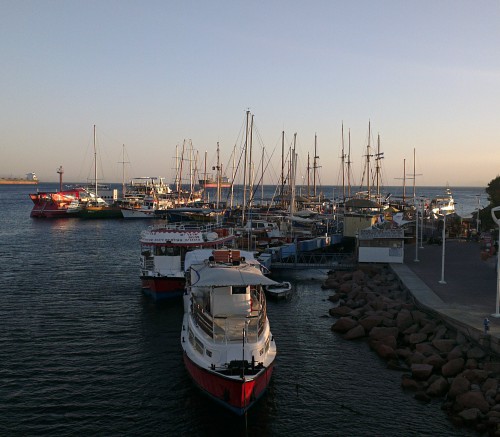 Or eating Passion Fruits (they are so cheap comparing to Hamburg!): 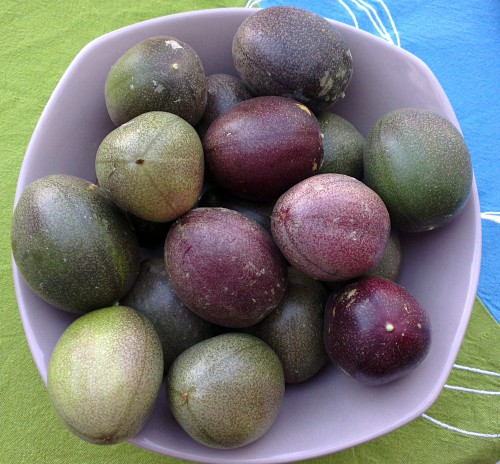 Or buying Pitas to take home with me (I miss Pitas a lot!): 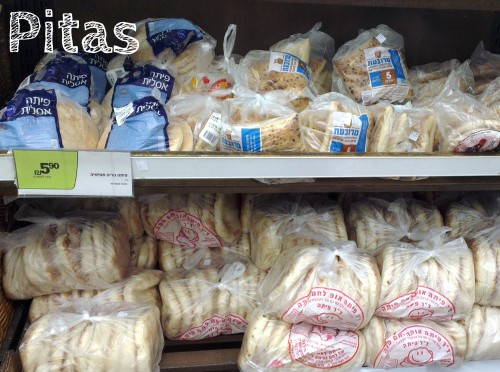 Or taking my in-laws to an Israeli restaurant (called “Israelit”) and enjoying the mezze salads of course:

Or eating my dad’s delicious food: 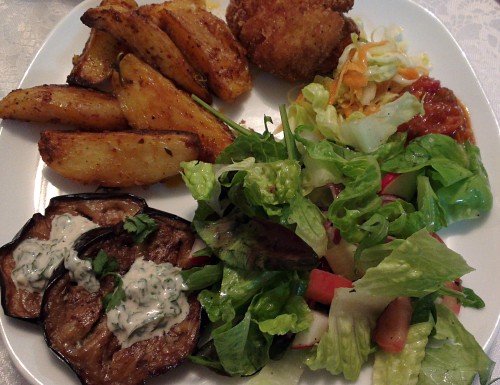 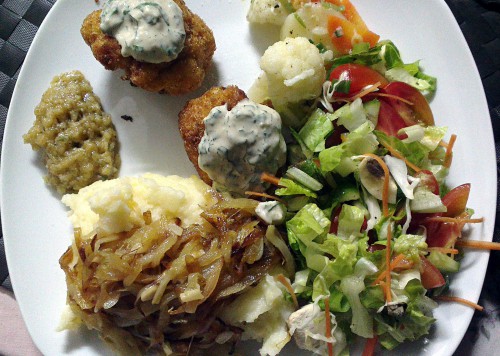 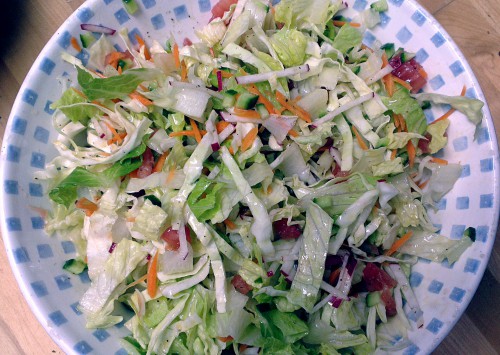 Or cooking Chinese food with my dad  – here is the family’s favorite Chinese dish – Eggplants with garlic sauce. 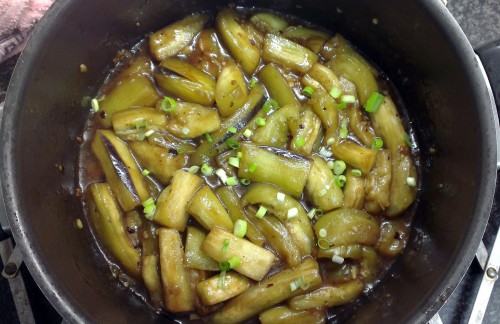 This is it, until the next visit, with a baby in tow… 🙂

Some articles about Veganism in Israel (I randomly picked them from Google, didn’t read them!)

And if you are still here, wow, good job and as a thank you here is a photo of my awesome cat Václav (because I never met a vegan who didn’t like cats!) 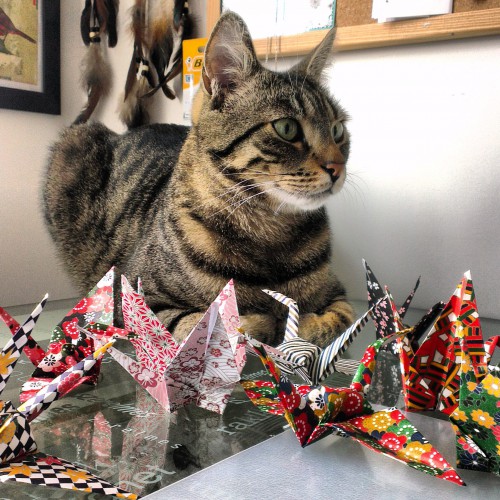